Let’s Play at the Museum

Hugo Zijlstra is an intern at Sound and Vision and works mostly on the research into Let’s Play video’s.

The Game On! Project, a collaborative effort between Sound and Vision and the University of Utrecht, researches strategies and undertakes efforts in preserving and archiving Dutch game history.

One of the ways in which this is done is by converting original carriers of old Dutch games to digital files and keeping them playable through emulation. However, this is not the only possible strategy. Games are dynamic objects; the game and player co-create a unique experience. Documentation might reveal even more information about a game than the game itself. Because how, for example, do we capture a game’s context, or how it was played, interpreted and experienced? One suggested strategy is to record so-called Let’s Play videos: game recordings (or gameplay recordings, to be more precise) in which the player provides verbal commentary. In most cases, the player him or herself is also shown on screen; to capture notable facial expressions, but also to create a more intimate relationship between player and viewer (after all, the player is visually present and could thus be regarded as engaging more 'directly' with the viewer).

As an experimental method for preservation purposes, a number of Let’s Play videos have been recorded with museum visitors at Beeld en Geluid. They played through several Dutch retro games from the ‘80’s on a Commodore 64. A diverse group was reached: from the young diehard gamers to casual senior players, young and old showed interest in preserving Dutch gaming history. Literally all Let’s Players shared the view that preserving Dutch game history is an important endeavor.

Playing on a Commodore 64 triggered hints of nostalgia for a few. For example, one participant familiar with the device noted that playing would be a “festivity of recognition and familiarity” and another mentioned that the music was typical for “classic arcade games”. While of course the younger players did not grow up with the computer, many of the older generation players also had no notable experiences with it. This could be accredited to the fact that the Dutch market for Commodore games was relatively small in size, and thus perhaps less known. Playing on a computer from 1982 proved to be a hurdle for many, as the majority had no experience wielding a joystick and exclaimed things such as “You would think that nowadays with a thousand buttons to press it’s harder.. But it’s actually harder with just a joystick!”

Although not a single participant was familiar with any of the games offered for play, several claimed the games resembled contemporary mobile games, referencing the hordes of casual mobile games available on handheld devices. “This game is a lot like Flappy Bird”, one player said about Eindeloos, asserting that both the graphics and gameplay bore resemblances. However, nearly all Dutch retro games were mentioned to contain educational elements - a facet often lacking in the mobile games referred to. Multiple younger players mentioned that the games would provide interesting options for learning in schools, and one said that learning topography through Topografie Wereld was “a more efficient and fun way to learn” than how they are currently taught at school. A young player also exclaimed that the game Herby reminded him of the amateur game developing program Game Maker, saying that “this game could be created easily” in it. This is a clear indicator of how game design techniques have been evolving rapidly. 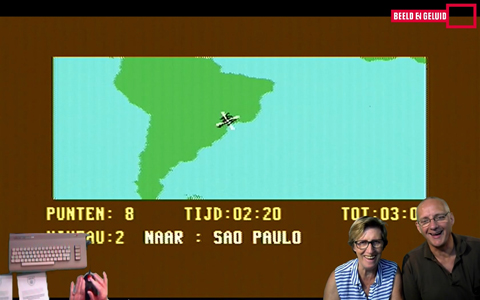