As part of the EUscreenXL project, the Netherlands Institute for Sound & Vision teamed up this spring with the World Meteorological Organization (WMO) to create an online exhibition that uses digital cultural heritage materials to tell the story of significant meteorological events that have occurred in Europe over the past 600 years. The exhibition is currently available as part of the WMO’s 17th World Congress which occurs every five years and brings representatives from every corner of the globe. Making use of a variety of heritage repositories including EUscreen, Open Cultuur Data, Open Beelden and Europeana, Sound & Vision, with support from EUscreenXL partners NInA and the WMO created a timeline that allows visitors to browse through artistic, journalistic and historical depictions of meteorological events that shook Europe.

The Little Ice Age is a period of climatic cooling that occurred during the 16th and 19th centuries. Europe was significantly impacted during this period of cooling. The cooling was so drastic and inescapable it began appearing in paintings. Dr. William J. Burroughs directly correlates the dramatic change in climate to the copious amounts of winter scenes painted by the Dutch greats of the Dutch Renaissance and Dutch Golden Age. These works of art, according to Burroughs, are the reason that we picture Christmas as a snowy, wintry occasion even though that is now rarely the case. If you’re looking for more examples you can explore more openly licensed Dutch works of art depicting winter at Open Cultuur Data. 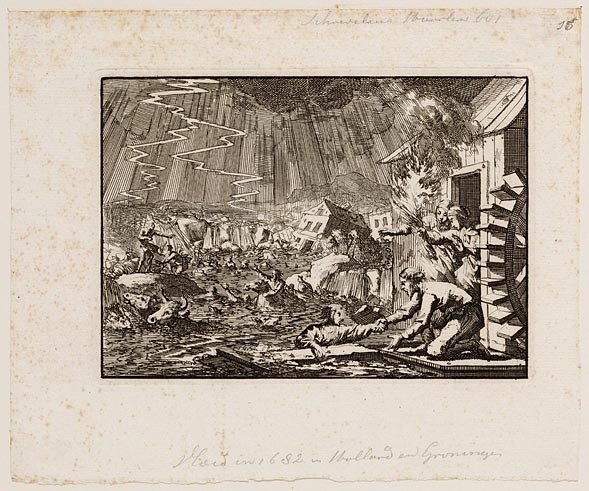 For some Europeans, the first vivid memories of winter may have been made during the winter of 1962-1963. This winter, sometimes referred to in the UK as “The Big Freeze” was one of the worst winters on record. It left most of Europe covered in snow and freezing temperatures for several months. You can explore photos from the freeze across Europe on the WMO timeline.

In the Netherlands, the “Big Freeze” impacted everyone’s daily life. For instance when the Ijselmeer froze, there were no more ferries from Stavoren to Noord-Holland. However, Intrepid northerners didn’t let this stop them from making the commute; people just got in their cars and drove across the frozen sea. The police and the Royal Dutch Touring Club (ANWB) helped out, directing traffic, putting a petrol station on the frozen sea, and even organizing races from Stavoren to Enkhuizen. Naturally, Dutch skaters took full advantage of the frozen Gouwzee, skating between Volendam and Marken. You can see more openly licensed videos about winter in the Netherlands at Open Beelden.

Leave it to a scientist and renowned astronomer, astrophysicist, cosmologist and author Carl Sagan to praise and lament the necessity of memory institutions. Sagan writes in his book Cosmos about the destruction of the Library of Alexandria, “It was as if the entire civilization had undergone some self-inflicted brain surgery, and most of its memories, discoveries, ideas and passions were extinguished irrevocably.” Thanks to platforms like EUscreenXL, Open Beelden, and Europeana, we can hope that such a cultural excerebration does not happen again.

Take some time to explore the WMO timeline and share with us your own photos and memories from the winter of 1962!