Digital Cultural Heritage: USA versus EU - where is the grass greener?

Digital Public Library of America Fest 2016 perfectly exemplified the energetic, efficient and communal progress that the American Cultural Heritage aggregator is bringing to the digital heritage sector. On april 15-16 EuropeanaTech Community Manager Gregory Markus ventured to Washington DC for DPLAfest, these are his highlights and reflections.

DPLA or Digital Public Library of America is ostensibly the US version of Europeana. It’s an aggregator and digital platform where institutions from across the US share their content and metadata in one place. DPLA is very young compared to Europeana. It started in 2013 and in the past 3 years they’ve aggregated 13 million items from 1,900 institutions. It’s funded primarily by the Alfred P. Sloan Foundation, Andrew W. Mellon Foundation, Bill and Melinda Gates Foundation, anonymous donors and others. The primary content providers are libraries but museums and archives are represented as well. It’s a fantastic initiative with lots of promise which makes one ask, in a nation that’s been “one” since 1776, how was it not conceived sooner?

Talks at DPLAfest mainly focused on aggregation, digital presentation, collaboration, education and technical development. In terms of content the key focus was on text and images. This is different from Europeana where moving image, sound and creative reuse have become key factors in its development.

There were 170 speakers and there were 5 to 6 talks happening at the same time, so catching everything was next to impossible. Especially considering the lengthy distances one needed to traverse between venues on day 2 and the unavoidable long lines at security checks before entering each building. But here’s what I managed to catch!

To start, in the beautiful Library of Congress venue the 450 attendees were treated to a warm welcome from DPLA Director Dan Cohen as well as some serious praise from the DPLA’s core funders. The admiration and respect that representatives from the Knight Foundation, Alfred P. Sloan Foundation and National Endowment for the Humanities (NEH) gave to the DPLA crew was inspiring. It was easy to see that the non-governmental funders really love and believe in what the DPLA is doing and appear to be in no rush to cut funding. These groups exclusively fund cultural and creative projects like your favorite National Public Radio (NPR) broadcasts. Europeana on the other hand is solely funded by the European Commission, a body whose funding priorities change regularly.

The following talk, “The future of libraries” provided nothing shocking about the move towards digital and open access. However, what was striking was how libraries in the US are being perceived not just as a place where one can check out books and do research but as knowledge hubs that can assist with job search, resume writing and even community rejuvenation. Librarians are now being seen as great problem solvers.

Education was a big topic at DPLAfest. The presentation on Open Educational Resources (OER) was a good opportunity to compare approaches to OER in the US vs Europe. However, the talk was STEM specific and not so much about cultural heritage. So on that note, if you’re in the EU and want to learn more about OER and digital technologies utilizing cultural heritage material in the classroom be sure to attend the Europeana Space Show & Touch & Tell Workshop, May 13 in Brussels.

Hydra in a Box vs Europeana Cloud

As I was at DPLAfest representing EuropeanaTech and our FLOSS Inventory advocacy work the biggest highlight was “Hydra in a Box: Building A Next Generation Platform for Digital Collections”. DPLA, Stanford and DuraSpace are currently working together to extend the existing Hydra platform to create a turn-key, robust, and flexible platform for digital collections. Hydra in a box is the US equivalent of Europeana Cloud, a service developed to streamline and support the hosting, delivery and collaboration between aggregation hubs and content providers.

What I took away from the Hydra in a Box talk was the amount of preliminary user research that went into it. Hydra, like IIIF, has gained a lot of attention in the past year because of the promise they provide for powerful systems and frameworks that will make collections and institutions more interoperable across the world. Development for Hydra in a Box has only just begun but I will be following it very closely and if you’re interested in OS development, you should too.

It wouldn’t be a cultural heritage event without a discussion about copyright. “Do We Need to Worry?: Update on Copyright Matters Affecting Digital Libraries” was one of the two copyright specific talks at DPLAfest and the house was packed with people lining the side of the room and even standing in the hallway hoping to hear the talk.

As some of you know, the US has the “Fair Use” legal doctrine which allows for the use and reuse of copyrighted materials for purposes such as research, aggregation or education. EU cultural heritage institutions look at the US in envy sometimes because of Fair Use. However, as Internet culture becomes the given norm, Fair Use is becoming harder to define and the landmark US legislation called the Digital Millennium Copyright Act (1998) is not just out of date, but damaging. Therefore, there is a move in D.C. to update copyright laws and this talk served as an update for the library/heritage sector.

The debate was similar to what’s seen everywhere. “Creative” sector companies like the film and music industry whose business models are lethargically or not at all adapting to the 21st century want copyright laws to stay archaic. On the other hand, tech and internet startups who are creating innovative business models need copyright laws to change, and “Little attention is paid to the educators, learners, innovators, new creators, computing specialists, and end users who are impacted by copyright everyday”. Interestingly, libraries, archives and museums are the ones stuck in the middle and due to the unpredictable nature of the US Congress, the Library Copyright Alliance (LCA) is hesitant to enter into the debate for fear of it going not in their favor.

Presenters Krista Cox and Carrie Russel shared with the audience numerous examples of instances where Fair Use has held up in court. These examples highlighted Fair Use’s adaptability in the digital age.  Also, everyone had a good laugh when it was shared that the US Government asked DPLA to create a pilot around the monetization of the content they’ve aggregated. 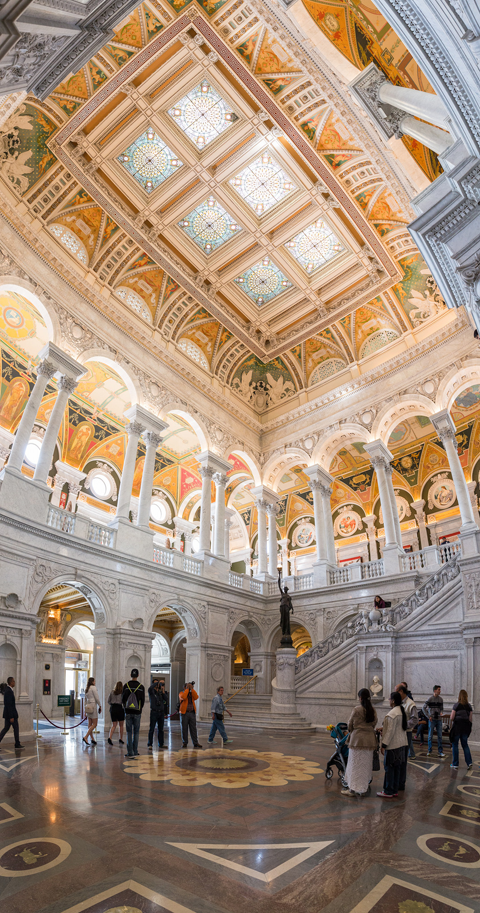 Some of you may remember earlier this year when the New York Public Library joined the ranks of the Library of Congress, Getty, and the Rijksmuseum (to name a few),  when they released 180,000 HQ images into the Public Domain. No need to express the cultural and societal value of releasing high quality cultural heritage images into the Public Domain. The NYPL Labs team was one of the few talks at DPLAfest that addressed creative reuse of open content. As they put it, “we thought we were in the Giving Away Free Content business. Turns out, we were in the audience development business”. They also stressed that their R&D team would gravitate to shorter, more agile projects and product deliveries as opposed to longer projects, citing the value of feedback and maneuverability in the ever changing digital society.

What I found most curious however was marketing and PR for cultural heritage institutions. There was nothing really miraculous or innovative about what the NYPL did (and they’re also the first ones to admit that) so why did it wind up in the New York Times, Wall Street Journal, Guardian, Buzzfeed etc? I had the chance to speak to the NYPL team after their presentation and they emphasized working with the NYPL internal PR team to craft a narrative around the content drop. Technical teams aren’t the best at PR work, but the NYPL team said that after the success of the content drop and subsequent social media campaigns run since, they’re working much more closely with other departments at NYPL to enhance their visibility. Of course, being located in NYC, living in Brooklyn, and having established press connections helps but this is definitely a lesson for all cultural heritage organizations, to work closely with PR and marcomms teams and to lose our modesty!

DPLAfest was by all accounts a jovial experience. The Library’s popularity is obvious and the momentum only seems to be growing. With funders eager to facilitate DPLA’s growth, developers committed to collaboratively building interoperable tools together and content providers excited to provide their materials DPLA is full steam ahead.