Tuesday the 8th of December the IIIF community, together with the Ghent University Library, organised a one day event to disseminate IIIF’s potential of interoperable image delivery over the web.

Attendants of the event constituted of a group of active members from the IIIF community; interested GLAM institutions using, or planning to use, IIIF and companies pitching their commercial services based on IIIF.

The programme of the day started with talks by IIIF members who explained what can be done with IIIF’s main APIs: the Image API and the Presentation API, which they illustrated by showing several impressive use-cases. The introductory talks also informed the audience about two exciting new extensions to IIIF, namely the Authentication API and the Search API, which provide another step towards ‘feature completeness’ for all kinds of collection holders.

Following up, several institutions presented their use-cases, ranging from a convenient way of sharing and presenting newspaper content, to using IIIF to compare - and share comparisons of - paintings from different museums. Since there were too many interesting cases to address here, we like to highlight a number of different presentations/demonstrations that particularly caught our eye.

Highlights of the day 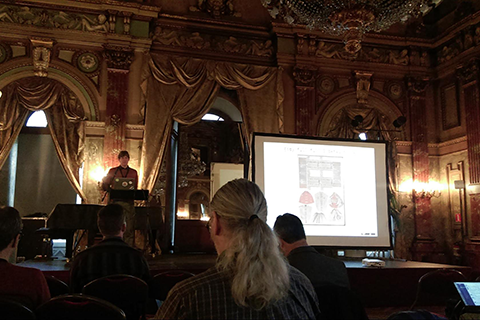 National Library of Wales
Glen Robson from the National Library of Wales (NLW) presented how the library implemented several very useful tools based on IIIF, such as a viewing tool for their collection of digitized newspapers (1.1 million images), including an annotation function for correcting available OCR transcripts. Read more on this project here.

Another one of their projects leverages a collection of so called tithe maps. In this project the NLW used IIIF technology to simultaneously show a tithe map in one window and a digitized record book in another - showing information about the owners and users of a piece of land. Using a crowd annotation function, it is possible for users to curate the (OCR) information of records from the book and link them to the correct tithe number on the map.

The latter project deftly shows how you can use IIIF to conveniently bring two collections together in an application and use IIIF’s Open Annotation support to annotate them.

NLW is currently busy linking more of their collections together in this manner and we are excited to follow their progress.

Aggregators
Mark Matienzo from the Digital Public Library of America (DPLA) presented the organisation’s interest in employing IIIF to optimize facilitating image sharing and interoperability between their large number of affiliated organizations. He indicated that the pluriformity of metadata schemes employed in their different data/service hubs prevents uniformly accessing image content, making it difficult to engineer for use-cases that require interoperability.

To improve upon this, their plan is to start mapping DPLA/EDM metadata to IIIF, creating a single consistent point of access for as much collections as possible.

David Haskiya likewise presented how Europeana is moving towards utilizing IIIF and pointed out in particular how IIIF also facilitates handling multilinguality by supporting the storage of object descriptions in mulitple languages.

Supporting other content with IXIF
Tom Crane from Digirati demonstrated their interpretation of IXIF, an extension of the IIIF Presentation API that enables other media types, such as audio, video or 3D objects, to benefit from IIIF’s interoperability mechanism.

Being able to extend to other media types entails that the (web-based) viewing software must be able to differentiate between these different media types, in order to present them correctly to the viewer. Digirati’s Universal Viewer shows that this is already possible and Tom demonstrated loading - and playing out - different IIIF manifests, representing images, 3D objects, audio samples and videos.

Sound and Vision as an audiovisual archive is very interested in exploring the possibilities of the IXIF extension for e.g. its collection of public domain and openly available audiovisual content.

Klokan Tech
Petr Pridal from Klokan tech demonstrated an extensive list of impressive implementations that show the potential of IIIF.

Amongst others, Klokan implemented a very useful Docker package for setting up a IIIF image server. This package also contained a ‘watch folder’ setup that can take in an image file and automatically convert and upload it to the (IIIF) image server, making it instantly benefit from all of the features of the Image API.

Petr also presented Embedr, which enables conveniently embedding IIIF images within a web document. A quick follow up demonstration of this was its integration within Omeka, making it possible to easily embed IIIF images via its CMS.

The day in Ghent confirmed that IIIF is a very useful standard that can improve the reach, reusability and ease of maintainance of various audiovisual/image collections at Sound and Vision.

Why confirmed?
Prior to this meet-up we have been experimenting with IIIF in the context of leveraging our collection of digitized television programme guides. For this we installed a IIIF image server, converted available metadata to proper IIIF manifests and installed Mirador and OpenSeaDragon to visualize these guides.

On top of this we implemented search page that enables full text search, based on the guides’ OCR, which displays found results accompanied by an image snippet - easily made possible by IIIF - from the digitized page:

Taken from our prototype application. Clicking on a snippet directs a user to a OpenSeaDragon viewer highlighting the snippet in the full page.

The implementation of this only took a few days by the author of this post. This year we’ll further keep a close eye on developments within IIIF and hope to share some of our use-cases later on.